Arachnomythologies, or...
Ways to know the Universe
in a Spider/Web

The spider/web is a dynamic, living species-habitat assemblage, its construction a story of tensions and attentions between the materials, surfaces, geologic forces, and temporalities of its environment. When the spider departs, the web it leaves behind is both a material memory and spatial-temporal diagram of the spider’s drifts on air: tracing past and tentative trajectories, mapping lines of thought. The spider/web is both model and metaphor for the fluid and dynamic meshwork of the ‘web of life’ itself; a model for more-than-human ecologies of attunement and sensitivity, helping us re/turn towards new (and old) possibilities for cohabitation. 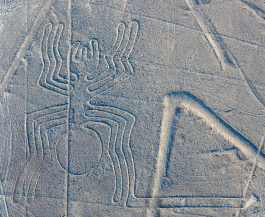 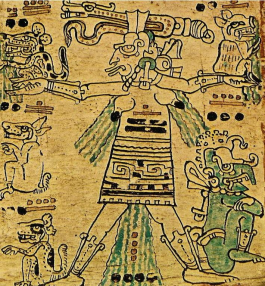 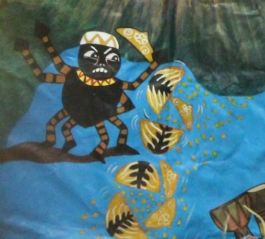 Above (left-to-right): (1) Aerial view of the Nazca ‘Spider’ geoglyph, located in the Nazca Desert in southern Peru; (2) ‘Ix Chel’ as depicted within the ‘Dresden Codex’ (3) ‘Spider Rock’, the home of ‘Abuela Araña’ according to Navajo beliefs; (4) A children’s storybook depiction of Kwaku Anansi as a trickster spider. Source: Wikimedia Commons

For the ancient civilisation of the Nazca people, the spider was imaged in their ‘Nazca lines’ (or geoglyphs), engraved directly onto the ground of the Nazca Desert in southern Peru as schematic-geometric figures that span a length of nearly 50 meters. Amongst the Mayans, the spider/web represents the placenta of Ix Chel, Maya goddess of childbirth and patron saint of weavers, and for whom the spider creates the thread of life from within itself. The Hopi and Navajo people in North America count on their Mujer Araña as both a powerful spirit and ally, whose magical agency of the Earth would teach them to weave; for other Californian tribes, she is an avenging spirit that punishes evil. In the central plains of Cheyenne or Lakota she assumes the role of trickster Veeho, much like the mythos of Kwaku Anansi: a rogue, arachnid folk hero in West African folklore whose cunning, unpredictable and liminal figure mediates between the gods of the sky and earth-bound humans. In Greek mythology Arachne, as entangled within a ‘web of resistance’ with goddess Athena, reveals a similar tale of mediation: of two women who use embroidery as a performative textuality, confronting and defending the social order. Mediation across lines of species and language continues today: the historic ŋgam dù divination, practiced by the Mambila people in Cameroon and Nigeria, brings its arachnomancers in acute relation, awareness and sensitivity to a spider’s oracular capacities.¹

1. The word 'ŋgam' refers both to a method of divination practiced by the Mambila people of Cameroon and Nigeria, and the ground-dwelling spider whose wisdom its diviners consult.

During ŋgam dù, a binary question is put forward to the spider oracle in her language of vibration, whose response is interpreted via the spider's rearrangements of the arachnomancer's divination cards. These cards are produced using stiff plant leaves from which symbolic shapes have been excised, selected from a larger set and arranged around the entrance to the spider’s burrow.

For as long as human activity has been recorded on this planet, the spider has wielded material and metaphoric power in its ability to weave a web of life and the myriad of stories enmeshed within its architecture. In centuries of most recent, however, the story certain humans have told themselves about our relations to nature—and forced the majority of others to believe as true and foundational to society—has produced a systemic dis-relation to the spider, other invertebrates, their ecosystems, and the biosphere at large across Earth. In this same period, Capitalocentric² activity of the few has altered the planet’s climate and the diversity and abundance of ecologies and life-forms that it supports, with toxic consequences that are being felt exponentially by the many. Invertebrate species like our spiderly kin are experiencing accelerated rates of extinction due to the harmful impacts of industrial-scale farming, pesticides, global warming, and the persistent exploitation of natural resources. A contingent history of thinking ‘nature’ as ‘other’—existing separate to, or alongside of, particular human Capitalocentric activity—has, in turn, facilitated a transactional relationship to landscapes and has worked to obscure our responsibilities within the complex multispecies worlds in which the homo capitalocenos (those most active agents of the Capitalocene) are entangled. Throughout this destructive period, Indigenous communities across generations of knowledge have protected biodiversity, in regions where their sovereignty is still intact. Occupying less than a quarter of the Earth’s surface, these communities are responsible for preserving 80 percent of our planet’s remaining biodiversity.³ However, the lands and lifeworlds they have practiced cohabitations of equilibrium upon have entered the eleventh hour.

2. The term ‘Capitalocene’ (or here, Capitalocentric) foregrounds the ways in which capitalist processes, and the responsible actors of Western imperialism, have acted upon—and continue to destroy—the Earth’s natural systems across an epoch of industrial, growth-driven activity.

Against the sixth mass extinction⁴ our cosmological relations to spider/webs must be renewed and revitalized, relearning the ways in which the spider and its web has emerged historically as a divine symbol, to produce (from within itself) the possibility for new modes of sensing and living together with its neighboring ecologies. The devastation of these ecologies, directly linked to an ‘ecocidal logic’ that underscores extractive capitalist activity, has pushed countless species out of their habitats, displaced Indigenous communities and their guardianship of the Earth, exposed us to new zoonotic diseases, and given rise to the planet’s environmental crises. The so-called Anthropocene, a thesis and conceptual model popularized in recent years to describe this current epoch of human activity, attempts to wholly frame the social, structural and ecological violences that are registered by the Earth’s natural systems. Yet, this thesis often flattens the world-ending burden placed upon those subjected to its supremacy; that is, as art historian T.J. Demos describes, “the complex and interrelated processes of the global-scale, world-historical, and politico-economic organization of modern capitalism stretched over centuries of enclosures, colonialisms, industrializations, and globalizations."⁵

4. A mass extinction event is defined by a rapid decrease in biodiversity across Earth. Often referred to as the Holocene or more recent Anthropocene, many scientists and climate researchers are in agreement that we are in the midst of the sixth mass extinction event—one caused as a direct result of human activity.

Countering not only a framing of the Anthropocene in its tendencies towards a universalizing logic, but equally the divisions and hierarchies of interspecies relation (human/nonhuman, nature/culture) that underscore Western climate colonialism, requires work. This work that those implicated must do is equal parts material, philosophical, ethical and affective, and it must be driven by a notion of climate justice that recognises the labor and collective knowledge of creatures and communities historically excluded from a Western vision of ‘the human subject’. To begin this work, we must start by recognising ecosystems as meshworks of interdependence, sensation and intimacy; to understand ecologies as lively webs of relation across and between species whose fates are intimately bound to one another in patterns of co-evolution, of flourishing, and of collapse. Spider/webs are both model and metaphor in this task.