"ON AIR WITH... " INTERSPECIES JAM SESSIONS 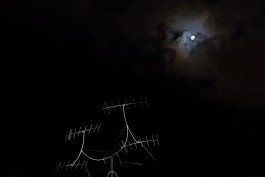 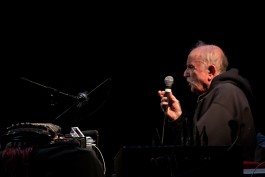 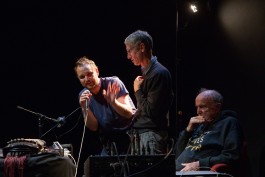 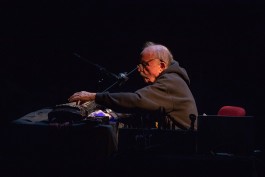 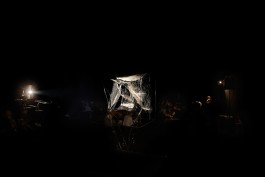 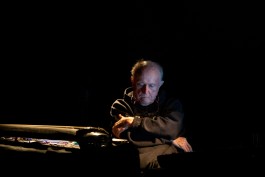 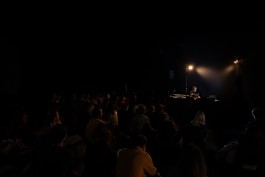 Jamming with Spiders: “Moon bounce” and ‘Silk’ by Alvin Lucier

Conceived around the idea of a cosmic jam session, for his 2018 carte blanche exhibition at the Palais de Tokyo, ON AIR, Tomás Saraceno created a series of encounters across species, scales and phenomena - jam sessions between humans, spiders and the cosmos. As part of this series of events, Saraceno invited  renowned experimental music pioneer Alvin Lucier to collaborate on a jam session engaging with the works installed at Palais de Tokyo, exploring the physical and cosmic properties of reverberation and resonance; a collaboration whose boundaries did not end with the Earth’s atmosphere, but with the Moon as an agent within the performance.

During this performance on the evening of Friday, October 26, 2018, Lucier premiered two new works, Silk, and Moon bounce. These works were inspired by conversations with Saraceno about interspecies communication with spiders, and the possibilities of sending signals to the Moon using the “Moon Bounce” radio- communications technique. Over months of collaborative development, Lucier, Saraceno and his studio experimented with the resonant possibilities of both Earth-Moon-Earth communication - including prototyping a Yagi antenna capable of sending radio signals to the Moon.

Lucier’s first piece, Silk, was informed by Saraceno’s work in arachnosonics: the sonic translation of spider/web vibrations made possible by the web sonification devices developed by Saraceno and his studio, and the musical properties of spider silk. Lucier used recordings of spider vibrations produced by Studio Saraceno, and parsed these iteratively through the silk strings of a Qin - an ancient Chinese lute instrument with silk strings.

For his second piece, Moon bounce, Alvin’s heartbeat was picked up by a special sensor, routed through the silk strings of the Qin, and then transmitted to the Moon by a series of radio transmitters stationed in Italy, Switzerland and the Netherlands, using the Earth-Moon-Earth technique.

Depending on the irregularities of the Moon’s surface from which the signal is reflected, each heartbeat takes approximately two-and-a-half seconds to complete a Moon bounce back to Earth. This process generates different sounds and syncopation between Lucier’s heartbeats in the room, and those transmitted back into the room.

With the support of the Festival d’Automne à Paris.

The premiere of this concert followed a public symposium on Aerocene moderated and curated by Sasha Engelmann. Aerocene is an open-source activist endeavor that envisions a new epoch of Earth’s planetary history, an epoch in which environmental awareness, ethics and politics are critical social values. In the unfolding of this history, Aerocene proposes forms of moving and sensing that embrace solar energy, wind currents and infrared radiation. Thus Aerocene Explorer sculptures float without burning fossil fuels, without using solar panels and batteries, and without helium, hydrogen and rare gases. In this way, Aerocene sculptures follow the energetic and elemental gestures of our planet and its nearest Star, enabling citizen-led environmental research and novel patterns of aerial mobility. 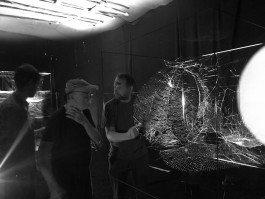 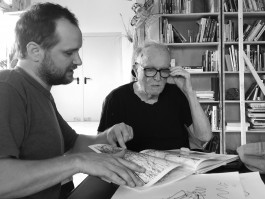 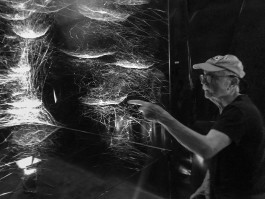 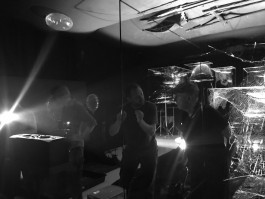 Earth-Moon-Earth communication is a radio communications technique relying on the propagation of radio waves from an Earth-based transmitter directed via reflections from the surface of the Moon back to an Earth-based receiver. As radio signals bounce off the surface of the Moon and are redirected back to the antennas, a sound is produced. The process of sending and receiving a signal takes approximately 2.5 seconds. However, due to the movement of the Moon and the roughness of its surface, each signal travels slightly different distances, resulting in minor alterations of sounds. Saraceno and Lucier were interested in these alterations of sounds as a way of entering into a dialogue with the Moon. Together with a team of scientists in Italy, the Netherlands and Switzerland, Saraceno’s studio developed a communication chain of three radio telescopes in Dwingeloo, Sardinia and Switzerland that allowed them to send signals from the exhibition room at the Palais de Tokyo in Paris to the Moon, and then listen to the sounds that returned to Earth after bouncing off the Moon’s surface. Heartbeat signals from Lucier were transmitted to the moon by the HB9Q satellite operated by Dan Gautschi in Switzerland, and the signals that bounced back from the surface of the moon were received by the Dwingeloo Radio Telescope in the Netherlands and the SRT Sardinia Radio Telescope in Italy. 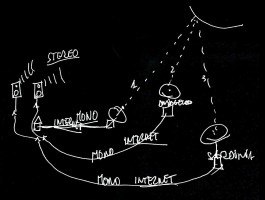 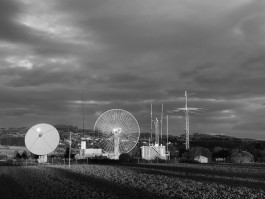 Near the village of Dwingeloo in the Netherlands is the Dwingeloo Radio Telescope: a single-dish radio, with a diameter of 25 m. When it was built in 1956, it was the largest radio telescope in the world, but was overtaken by the 76-m Lovell Telescope the following year. The radio no longer operates in an official capacity, and is now a national heritage site. Two galaxies are named after this telescope.

The Sardinia Radio Telescope (SRT) is a large, fully steerable radio telescope with a 64 m primary mirror. Located near San Basilio, province of Cagliari in Sardinia, Italy, the SRT is a collaboration among the Istituto di Radioastronomia di Bologna, the Cagliari Observatory (Cagliari) and the Arcetri Astrophysical Observatory (Florence). 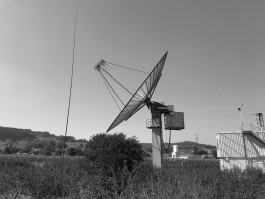 The main purpose of HB9Q is to operate DX, especially EME from 50 MHz to 10450 MHz by sharing HB9CRQ’s shack and equipment.

During September of 1998, after 19 years of activity from HB9CRQ’s old QTH (residential area, see also HB9CRQ QSL-card) all equipment was moved to an industrial area 5 km NW of the old QTH. 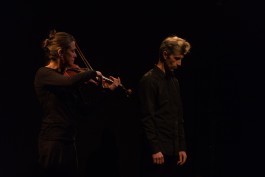 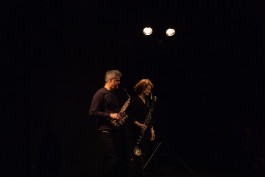 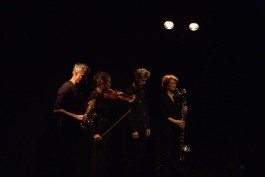 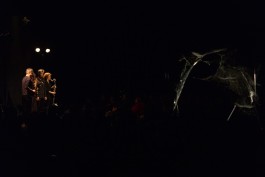 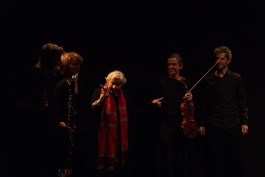 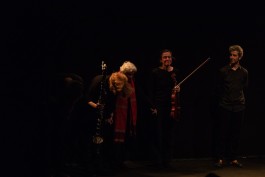 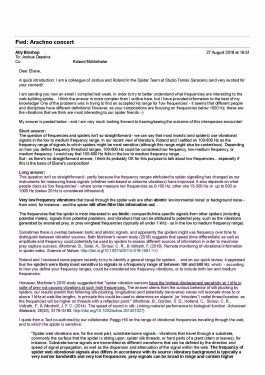 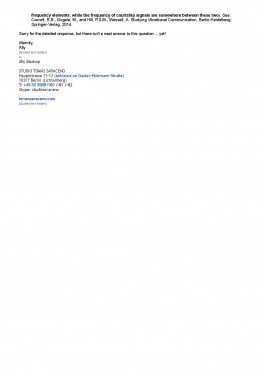 by Eliane RadigueWith Carol Robinson, Bertrand Gauguet, Julia Eckhardt, Yannick Guedon and Holocnemus pluchei.Eliane Radigue proposes a sequel of her Occam Ocean series, a meditative sound exploration that she started in 2011. Using only low frequencies instruments or voices tonalities - the ones that spiders are likely to be hearing - the musicians perform solos, duets and quartets, playing very long and continuous notes with the hope to trigger their reactions and play live with them.

The premiere of this concert followed a symposium on Arachnosophy, moderated and curated by Filipa Ramos. Arachnosphy brought together thinkers from various disciplines—arachnologists, biologists, historians and philosophers of science and media, composers— to think with, about and near spiders and their webs. It considered the actual spiders around us—their bodies, cognitive and perceptive realms—as well as the ways knowledge about these animals has been produced, shared, and how this knowledge has triggered further investigations and inspired other areas of research - such as Tomás Saraceno’s experiments with spider web hybridities, or with possibilities for interspecies communication. Simultaneously, the symposium explores the symbolic and affective dimensions of how we look at spiders, and how, by paying renewed attention to them, we might discover new threads of connectivity.

Evan Ziporyn, composer and director of the Center for Art, Science and Technology of MIT, imagines a new piece for ON AIR, in which an ensemble plays together in a spider web.
“We play in the canvas of the spider, using sonification of 3D models and 2D images in the harmonic language of Just Intonation. Rather than playing with the spider herself, we are using her webs as the basis of our music, reading her scores, using her geometries as the foundation for our vibrations, she provides us a soundscape through which we can wander”. A collaboration between MIT Center for Art, Science & Technology (CAST) and Department of Civil & Environmental Engineering (Professor Markus Buehler, Director).

This concert emerged from myriad interactions between different disciplines, in an effort to work together - and extend the boundaries of disciplinary knowledge and practices - toward new understandings of emergent human and non-human entanglements. The technical development of this musical instrument was inspired and made possible by the Spider Web Scan - a novel scientific apparatus and technique for generating precise 3D scans and digital models of complex spider webs - first created by Saraceno in 2009/2010 in collaboration with the TU Darmstadt, and more recently refined in Saraceno's ongoing collaboration with the MIT Laboratory for Atomistic and Molecular Mechanics (led by Markus Buehler). Based closely on a tent-web made by a semi-social South American Cyrtophora citricola spider, the work is not simply interdisciplinary, but quite literally an interspecies collaboration.

The premiere of this concert followed a symposium on Networks, moderated and curated by Etienne Turpin and Anne-Sophie Springer. The symposium brought together a new set of voices coming from different disciplines, from network and social theory to art history and anthropology come together on November 23rd. They open up the discussion towards what it is to be ON AIR, revealing the myriad material and immaterial, visible and invisible architectures we are embedded within.These conversations, introduced by Bruno Latour, will investigate ways of decentralising and decolonising our way of thinking as a species, hoping to overcome human exceptionalism, towards new forms of activism and the building of common worlds. 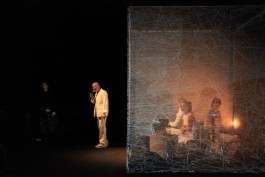