The myth system associated with the Anthropos is a setup, and the stories end badly. Bad actors need a story, but not the whole story.Species Man does not make history

Anatomical features: a small spider, 3.5 to 4.5 mm in size, it has a yellowish prosoma with a darker central area and a white opisthosoma with a typical brown pattern.

Behaviour: Spider which builds tangle webs at the ends of shrubby plants. Compared with other spiders which, if disturbed, abandon their webs and flee, the K.aulica has good resistance to disturbance. If the branch on which it has built its web is beaten, it takes refuge in the centre of the small web and waits for the commotion to cease. 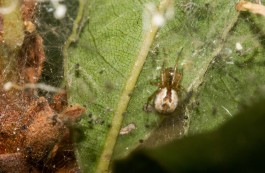 What happens when human exceptionalism and bounded individualism, those old saws of Western philosophy and political economics, become unthinkable in the best sciences, whether natural or social? Seriously unthinkable: not available to think with. Biological sciences have been especially potent in fermenting notions about all the mortal inhabitants of the Earth since the imperializing eighteenth century. Homo sapiens — the Human as species, the Anthropos as the human species, Modern Man — was a chief product of these knowledge practices. What happens when the best biologies of the twenty-first century cannot do their job with bounded individuals plus contexts, when organisms plus environments, or genes plus whatever they need, no longer sustain the overflowing richness of biological knowledges, if they ever did? What happens when organisms plus environments can hardly be remembered for the same reasons that even Western-indebted people can no longer figure themselves as individuals and societies of individuals in human-only histories? Surely such a transformative time on Earth must not be named the Anthropocene!
…
My first demon familiar in this task will be a spider, Pimoa cthulhu, who lives under stumps in the redwood forests of Sonoma and Mendocino Counties, near where I live in North Central California. Nobody lives everywhere; everybody lives somewhere. Nothing is connected to everything; everything is connected to something. This spider is in place, has a place, and yet is named for intriguing travels elsewhere. This spider will help me with returns, and with roots and routes. The eight-legged tentacular arachnid that I appeal to gets her generic name from the language of the Goshute people of Utah and her specific name from denizens of the depths, from the abyssal and elemental entities, called chthonic. The chthonic powers of Terra infuse its tissues everywhere, despite the civilizing efforts of the agents of sky gods to astralize them and set up chief Singletons and their tame committees of multiples or subgods, the One and the Many. Making a small change in the biologist’s taxonomic spelling, from cthulhu to chthulu, with renamed Pimoa chthulu I propose a name for an elsewhere and elsewhen that was, still is, and might yet be: the Chthulucene. I remember that tentacle comes from the Latin tentaculum, meaning “feeler,” and tentare, meaning “to feel” and “to try”; and I know that my leggy spider has many-armed allies. Myriad tentacles will be needed to tell the story of the Chthulucene.
The tentacular are not disembodied figures; they are cnidarians, spiders, fingery beings like humans and raccoons, squid, jellyfish, neural extravaganzas, fibrous entities, flagellated beings, myofibril braids, matted and felted microbial and fungal tangles, probing creepers, swelling roots, reaching and climbing tendrilled ones. The tentacular are also nets and networks, it critters, in and out of clouds. Tentacularity is about life lived along lines — and such a wealth of lines — not at points, not in spheres. “The inhabitants of the world, creatures of all kinds, human and non-human, are wayfarers”; generations are like “a series of interlaced trails.”
…
Let me summarize my objections to the Anthropocene as a tool, story, or epoch to think with:

(1) The myth system associated with the Anthropos is a setup, and the stories end badly. More to the point, they end in double death; they are not about ongoingness. It is hard to tell a good story with such a bad actor. Bad actors need a story, but not the whole story.

(2) Species Man does not make history.

(3) Man plus Tool does not make history. That is the story of History human exceptionalists tell.

(4) That History must give way to geostories, to Gaia stories, to symchthonic stories; terrans do webbed, braided, and tentacular living and dying in sympoietic multispecies string figures; they do not do History.

(5) The human social apparatus of the Anthropocene tends to be top-heavy and bureaucracy prone. Revolt needs other forms of action and other stories for solace, inspiration, and effectiveness.

(6) Despite its reliance on agile computer modeling and autopoietic systems theories, the Anthropocene relies too much on what should be an “unthinkable” theory of relations, namely the old one of bounded utilitarian individualism — preexisting units in competition relations that take up all the air in the atmosphere (except, apparently, carbon dioxide).

(7) The sciences of the Anthropocene are too much contained within restrictive systems theories and within evolutionary theories called the Modern Synthesis, which for all their extraordinary importance have proven unable to think well about sympoiesis, symbiosis, symbiogenesis, development, webbed ecologies, and microbes. That’s a lot of trouble for adequate evolutionary theory.

(8) Anthropocene is a term most easily meaningful and usable by intellectuals in wealthy classes and regions; it is not an idiomatic term for climate, weather, land, care of country, or much else in great swathes of the world, especially but not only among indigenous peoples.